Cepheid and BioGX announced on Monday a collaboration to develop a monkeypox assay on the GeneXpert system. Financial and other terms of the deal were not disclosed.

The assay will be delivered as part of Cepheid’s FleXible Cartridge program for the GeneXpert, a system that has an installed base of more than 40,000 instruments in 180 countries, the firms noted in a statement.

BioGX has completed in-silico analysis of over 2.5 million SARS-CoV-2 genome sequences available as of May 31, 2022. Sequence analysis compared the available Omicron genomes against the SARS-CoV-2 nucleocapsid (N-gene) and envelope (E-gene) , targeted by BioGX products. In-silico analysis and empirical testing of the Omicron variant confirmed the gene mutations will not affect the performance of the BioGX portfolio of SARS-CoV-2 products.

*Variants of concern being monitored by US CDC and WHO

**Present in a subset of sequences

The assay has a turnaround time of about an hour, and the company said it is positioning it for adoption at the point of care, such as in doctor’s offices and clinics. Conventional approaches rely on culturing methods and can take up to days or even months to produce a result in the case of M. hominis.

Waiblingen, Germany-based Bosch, a subsidiary of the Bosch Group, has worked with Birmingham, Alabama-based BioGX to develop the test. The partners announced an agreement in 2020, under which BioGX would develop, produce, and supply reagents for Bosch’s Vivalytic cartridges. BioGX also agreed to provide custom reagent manufacturing services for Vivalytic open system users at that time.

Scroll to top
We use cookies on this site to enhance your user experience. By clicking ACCEPT, you understand and accept the use of cookies.
Cookie settingsACCEPT
Manage consent

This website may use cookies and other technologies to personalize content and advertisements on sites such as Google Ads, Facebook to you on this and other websites and provide social media features on this website, including social media sites such as Facebook, Twitter, LinkedIn. By accepting cookies, you understand that you are directing BioGX to disclose data that may include internet tracking data, cookies and the IP address you used to access this website, which may be considered personal information, to these third parties for the purposes stated above. You can still use this website if you do not accept cookies, but your experience on this and other websites may be different. You can always update these settings in your browser if you change your mind. You also have the ability to customize your cookie preferences below.  Cookie Policy
Strictly Necessary Cookies Always Enabled
These cookies are necessary for the website to function and cannot be switched off in our systems. They are usually only set in response to actions made by you that amount to a request for services, such as setting your privacy preferences, logging in, or filling in forms. You can set your browser to block or alert you about these cookies, but blocking these cookies will prevent the site from working. These cookies do not store any personal information.
Functional Cookies
These cookies help to perform certain functionalities like sharing the content of the website on social media platforms, collect feedbacks, and other third-party features.
Performance Cookies
These cookies allow us to count visits and traffic sources so we can measure and improve the performance of our site. They help us to know which pages are the most and least popular and see how visitors move around the site. We may provide these cookies to third party service providers to help us run these analytics (e.g. Google Analytics). All information these cookies collect is aggregated or anonymized data and do not relate to you personally. If you block or opt out of these cookies, we will not know when you have visited our site, and will not be able to monitor its performance.
Analytical Cookies
These cookies are used to understand how visitors interact with the website. These cookies help provide information on metrics the number of visitors, bounce rate, traffic source, etc.
SAVE & ACCEPT
Powered by

Richard Innenberg joined BioGX in 2022 as consulting CFO. Mr. Innenberg has over 30 years of experience in finance and the medical device industry including 25 years as an investment banker to healthcare and medical device companies. He has extensive experience in M&A and raising capital through the public and private markets. Mr. Innenberg worked in increasing roles of responsibility up through Managing Director with Lehman Brothers, Robertson Stephens, Lazard and Piper Jaffray. He is currently a Managing Director with New Century Capital Partners, where he provides investment banking and consulting services to medical device companies, as well as President of RIM Advisors, a medtech strategy consulting firm. He is a Certified Public Accountant (not current), worked in audit and tax with KPMG Peat Marwick. Mr. Innenberg received an MBA degree from The University of Chicago.

Mr. Scott joined BioGX in 2021 as the Director of Operations. He is responsible for Manufacturing, Production, QC Testing, and Operations for BioGX.  With more than 12 years in Oral Solid Dose and Aseptic Manufacturing, he also served 8 years in the United States Army.   Mr. Scott studied Business Management at Colorado Technical University and also earned a black belt certification in Six Sigma tools and methodologies through Villanova University.

If you are contacting us because you have received a phone call offering genetic testing services, with the caller requesting personal health information and personal identification numbers (such as Medicare Card numbers), please know that we are NOT responsible for such calls.

We, BioGX, Inc., (registered trademark “BioGX”) with offices in Birmingham, AL, Dallas, TX, and Amsterdam, The Netherlands, are a diagnostic test manufacturer and not a testing laboratory, and we are not in any way affiliated with such callers. We do not know who is making these calls.

UNDER NO CIRCUMSTANCES BIOGX WOULD EVER CONTACT INDIVIDUALS TO OFFER GENETIC TESTING SERVICES OR REQUEST PERSONAL INFORMATION OF ANY KIND.

Dr. Shazi Iqbal joined BioGX in 2011 as CoFounder and Chief Executive Officer of the Company. Dr. Shazi Iqbal has over 20 years of experience building healthcare technologies and businesses in business development, corporate sales, global marketing and product development. Previously, Dr. Iqbal worked as Director of CSR Program and Corporate Programs, concurrently leading Cepheid’s custom reagents business and GeneXpert commercialization strategy and sales execution for Veterans Affairs, Department of Defense, national hospital networks and Group Purchasing Organizations. Prior to Cepheid, he served as Head of Global Marketing and Business Development for BioGenex, a cancer diagnostics company. Dr. Iqbal has co-founded SYFR, MicroGen Systems, GeneXpress Informatics and CodeMD. He started his career as a Senior Scientist at Systems & Processes Engineering Corporation (SPEC). Dr. Iqbal received a Ph.D. in Biology from University of Texas at San Antonio, holds two master’s degrees in Biochemistry and Biotechnology and has several patents and publications to his name.

Emergency Use Only (EUO) Instrument Label 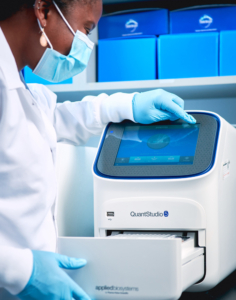 This Fact Sheet informs you of the significant known and potential risks and benefits of the use of the BioGX Xfree™ COVID-19 Direct RT-PCR.

The BioGX Xfree™ COVID-19 Direct RT-PCR is validated for use with respiratory specimens collected from individuals suspected of COVID-19 by their healthcare provider. 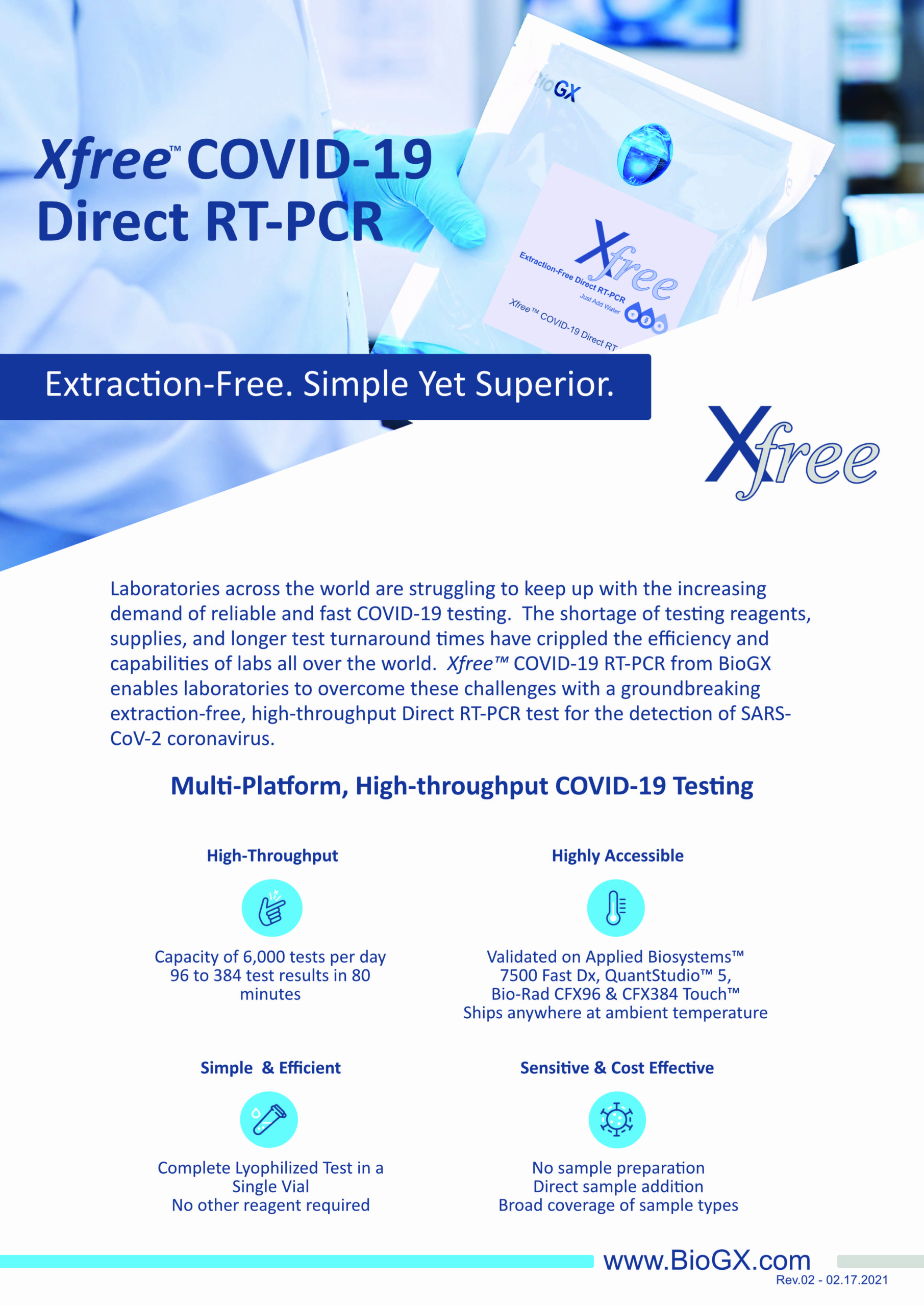 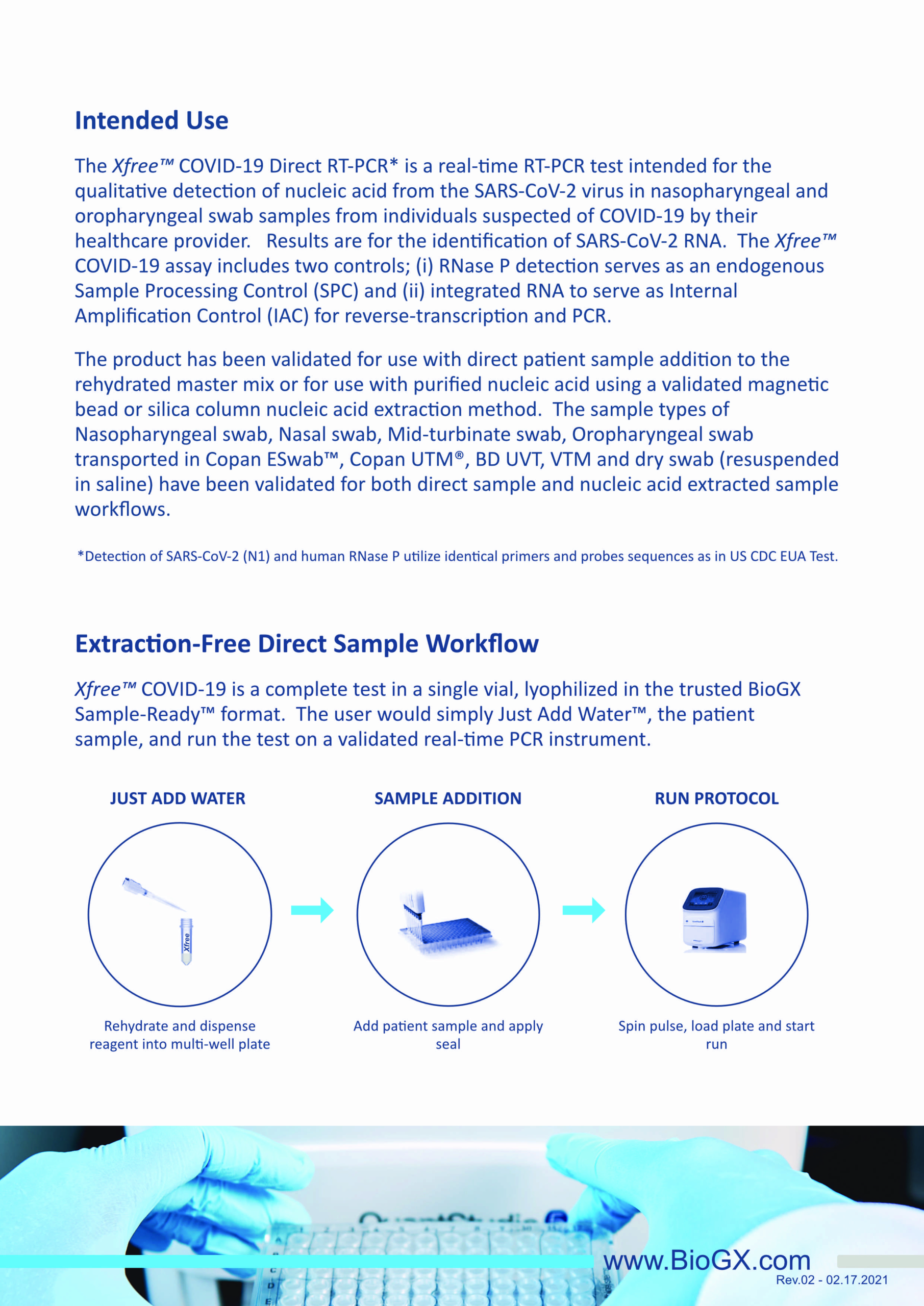 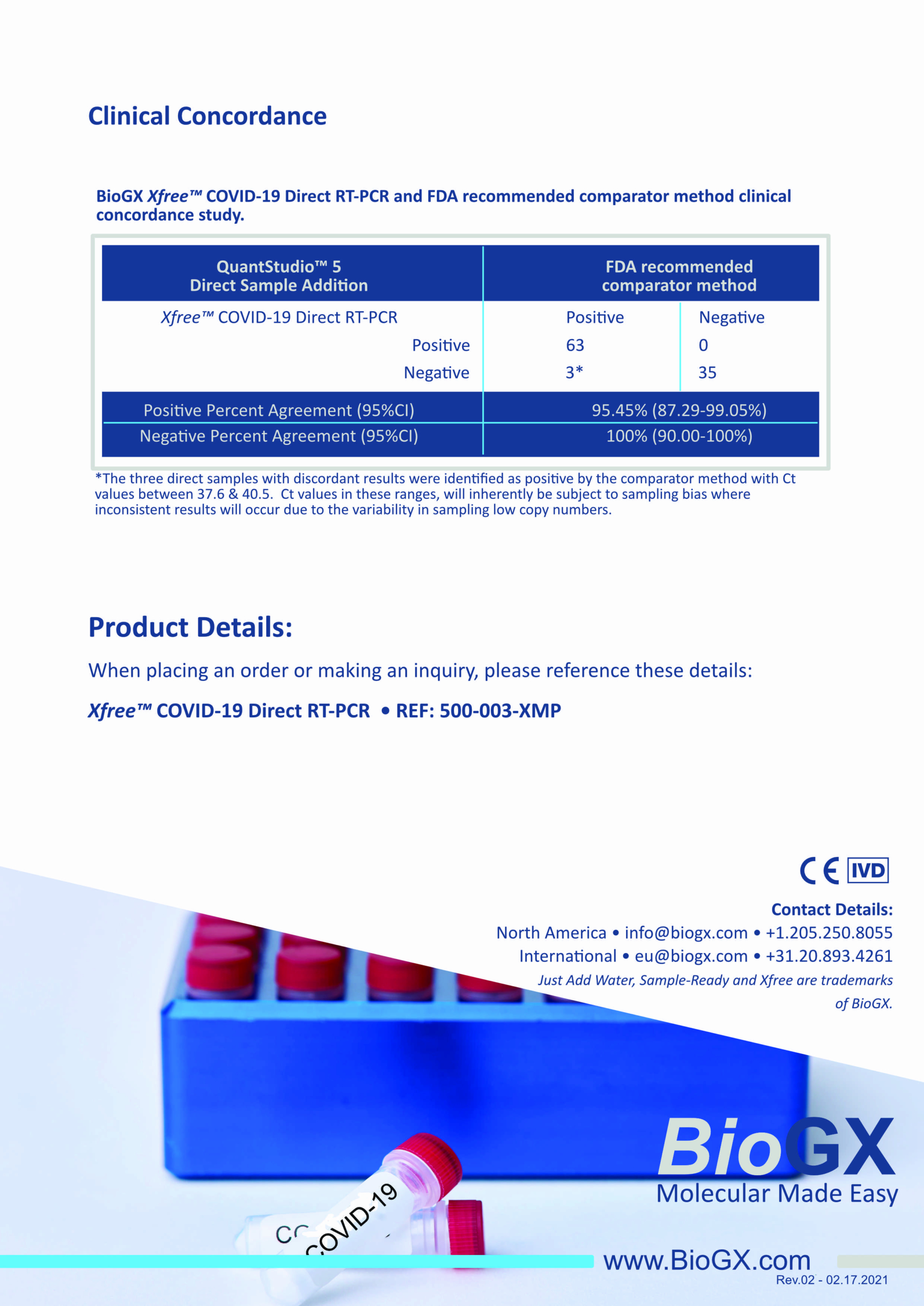 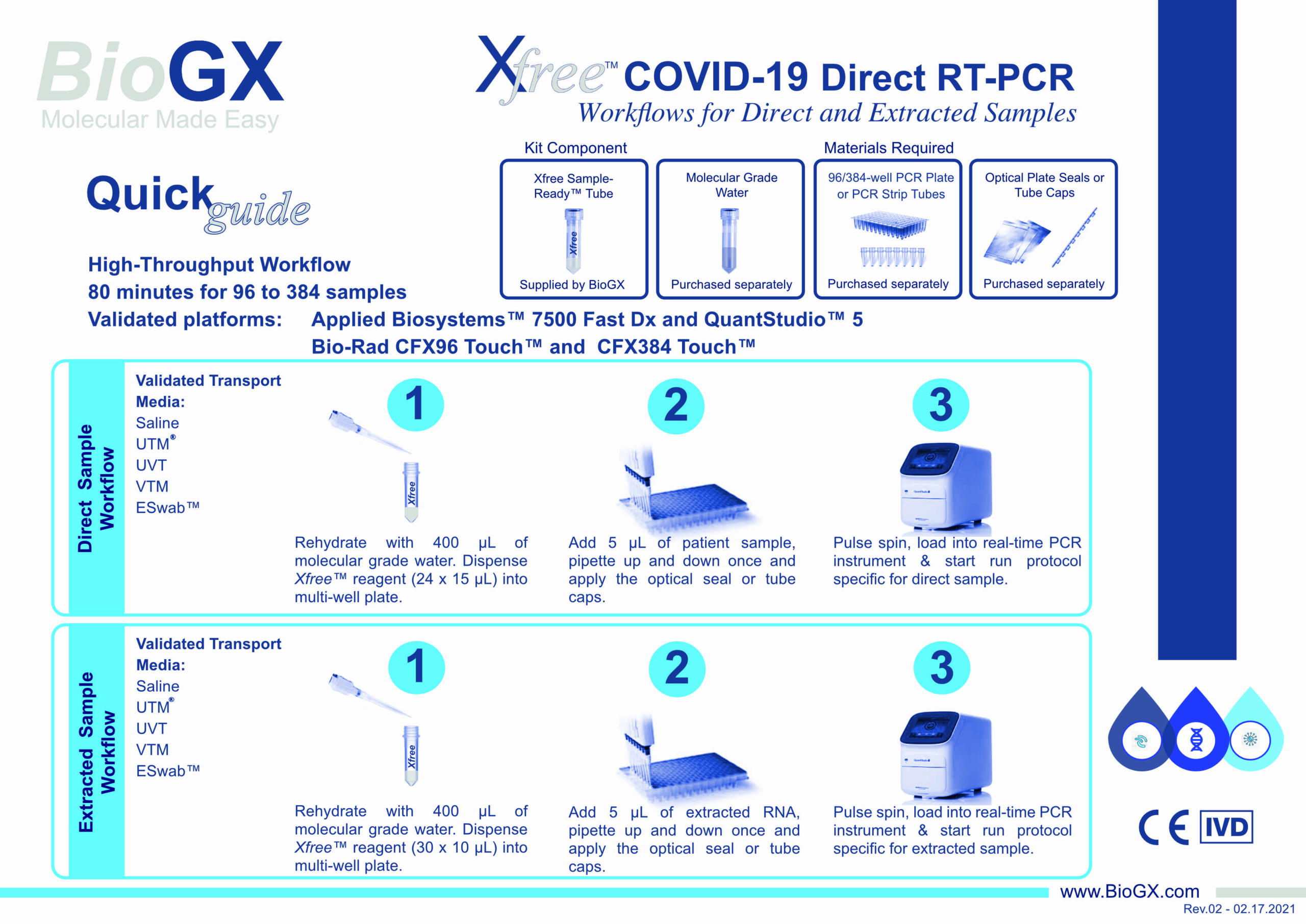 Please complete the form below and our Product  Support Team will be in touch with you shortly.

Dr. Shahin Iqbal joined BioGX in 2019. Dr. Iqbal is the Senior Vice President of Global Operations at BioGX and has over 20 years of experience in clinical and molecular diagnostics. Before joining BioGX, Dr. Iqbal led the Abbott Diagnostics Global Service & Support specifically for informatics, core lab automation, immunoassay and clinical chemistry systems at Abbott Diagnostics. He was also responsible for design and development of FISH automation systems at Abbott Molecular. He is the recipient of the President awards and multiple service & innovation awards at Abbott. Dr. Iqbal holds multiple patents on optical sensors for covers slips, automation systems development, RFID applications and robotics for system dispensing. Prior to joining Abbott, Dr. Iqbal was head of operations, quality & regulatory, systems development and manufacturing of IHC systems at BioGenex in California. Dr. Iqbal has an MBA and Ph.D as well as a Masters in Electrical Engineering degree from the University of Texas in San Antonio. 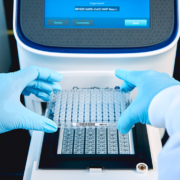 Mr. Mohammed Merchant joined BioGX in 2020 as Senior Director of Digital Product Management & Marketing, responsible for managing all digital applications and assets. He brings over 20 years of experience in digital technology, e-commerce, and software product management in various industries and has held product leadership roles at Sprint, Travelocity, Capital One, Sabre, and cxLoyalty. Mr. Merchant has a proven track record of taking complex business needs and transforming them into successful digital and mobile products and solutions. He holds an MBA and MS Innovation and Entrepreneurship degrees from University of Texas in Dallas and received his BS in Management Information Systems from Oklahoma State University.

Dr. Martinez joined BioGX in 2015. Dr. Martinez manages global marketing of BioGX manufacturing services; expanding our portfolio of IVD products; managing the global technical support efforts of all molecular diagnostic products; and manages a team of scientists responsible for product and technology innovation in conjunction with existing corporate partnerships. Dr. Martinez has over 20 years of experience in molecular biology. Prior to joining BioGX, Dr. Martinez held research positions focusing on cancer cell biology at Albany Medical College, microbial community dynamics at The Georgia Institute of Technology and microbial physiology at The University of Alabama. Dr. Martinez holds a BA in Biology from Boston University and a Ph.D. in Microbiology from The Georgia Institute of Technology.

Dr. Vickery founded BioGX in 2007 and served as President and CEO until 2011. Prior to founding BioGX, Dr. Vickery worked in sales and as a technical consultant at Cepheid. Prior to Cepheid, Dr. Vickery worked at the FDA as a University of Maryland JIFSAN postdoctoral fellow at the University of Maryland, and later served as the Lead for Molecular Methods Development at the U.S. FDA Gulf Coast Seafood Laboratory. He holds multiple patents in biotechnology, has authored or co-authored many publications, and has extensive experience in gene expression analysis, and in the design and development of rapid multiplex molecular tests for microbial and viral detection. Dr. Vickery holds a B.S. degree in Physics and both M.S. and Ph.D. degrees in Biology (molecular biology and molecular genetics focus – both prokaryotic and eukaryotic). Prior to entering graduate school, Dr. Vickery worked as an executive in the lowbed trailer industry for almost 10 years, pioneering the sale of American made heavy equipment transport trailers into China (ROC) and Japan during his tenure in the industry, and resupplying the oilfields of Kuwait with specialized trailers after the Gulf War.

Mr. Hughes joined BioGX in 2015. Prior to joining BioGX, Mr. Hughes led efforts for a diverse range of companies with the development and implementation of certified quality management systems ranging from data storage devices with SONY Corporation, security & detention devices with Norment Security Group, textile manufacturing with Twitchell Corporation, combat vehicle manufacturing with General Dynamics, and therapeutic medical devices with Steris Corporation. Christopher has a BSE from Auburn University and an MBA from Troy State University.

Mr. Blackstone joined BioGX in 2007. He has served at BioGX in various senior R&D and quality management roles prior to his current position as Senior Director of Product Development. Mr. Blackstone has designed and directed the development of over 100 multiplex real time PCR products in the fields of food safety, water quality, pharma QC, and clinical diagnostics. Mr. Blackstone previously served for eight years at the US Food and Drug Administration and as a Commissioned Research Officer in the US Public Health Service Commissioned Corps where he achieved the rank of Lieutenant Commander. George Blackstone received his Master of Science degree from Louisiana State University.